Prior to the NZ Arbor/Husqvarna Auckland Regional TCC last Saturday the ITCC advised all Head Judge(s) and Technician(s) that Single Rope Work Positioning was not allowed in ISA TCC sanctioned events.

By-and-large the ITCC 'ruling' was adhered to on Saturday. Only SRT Ascent systems were allowed, including those using the Rock Exotica Unicender, (the Rope Wrench also featured in the 'Open' Masters).

The Unicender is now more-or-less accepted as a legitimate (read safe) mechanical device in tree climbing competitions although, back in the day, it was viewed with a jaundiced eye.

To have banned the Unicender all together might have been a big ask for organizers since Auckland is considered the Unicender capital of the world thanks to the climbing of Mr Johno Smith.

We all know SRT Ascent systems get the big tick from the ITCC and that currently SRT Work Positioning is not allowed.

What is not so clear is the difference between the two forms of single rope technique. That is, when does SRT Ascent become SRT Work Positioning?

Dale Thomas and Johno Smith put the theory to the test in the Aerial Rescue event on Saturday.

Both climbers used the installed access line to complete the rescue (by ascending and descending on the Unicender).

The AR scenario, set-up by world record holder Nicky Ward-Allen, had the access line set some distance from 'Woody' (the victim). You could not climb directly up the access line to reach the victim.

To counter this situation, Dale and Johno used their throwline to reposition the access line into the same crotch Woody was suspended in. This simple manoeuvre enabled easy access to the victim.

Dale spent a full four minutes on the ground, then completed the ascent up the single line with the Unicender, released Woody's friction hitch and lowered him to the ground well within the time limit of five minutes. Johno more-or-less did the same.

At no time did the competition climbers touch a branch, or move off in a lateral direction to the access line. It was a simple matter of straight up and straight down on a single line.

Was this SRT Ascent? Or was it SRT Work Positioning?

Obviously the judges, Marlies Laser and Rossy Ross thought the former. Johno and Dale were not dq'ed and finished fourth and fifth respectively in the Aerial Rescue event.

Treetools is not sure where one form of SRT blurs into the other: SRT Ascent/SRT Work Positioning.

Anecdotal research suggests Ascent becomes Work Positioning when the climber moves 'off-line' - that is he/she moves horizontally/laterally to the access line. Others say Ascent means just that - ascent only - if you descend on the line it is deemed SRT Work Positioning.

Sorry guys, we do not have the answer! All we can confirm is this: one form of SRT is OK and the other is not, as vague as that may be. 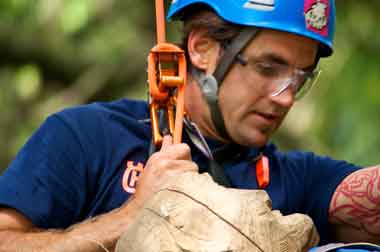