A new (safe) world for arb companies - are you ready?

The establishment of WorkSafe NZ is a direct result of the recommendations set by the Royal Commission into the Pike River Tragedy and the Independent NZ Taskforce on Workplace Health and Safety.

WorkSafe NZ forms part on an overall package to reform current workplace health and safety and is based on the Australian Model Law - see link here for a more in-depth explanation.

Some NZ arb companies could be in for a shock if New Zealand follows the aussie rules to the letter!

For example, it is common practice for smaller NZ arb companies to have employees purchase there own PPE.

Under the aussie rules it is an offense for an employer to charge or levy a worker for PPE.

Companies can provide a PPE allowance provided the allowance covers the full cost of the personal protective equipment and the gear complies to all the usual safety standards.

Under the new regime WorkSafe inspectors will have a greater range of powers - download the NZ Industrial Safety News article for more detail on the different levels of inspection.

Wayward companies can expect no compromise from WorkSafe NZ: individuals will face a fine of up to $600,000 and/or five years in prison with corporates exposed to a potential $3 million in fines for a Category One Offense (Reckless Conduct).

Foresty and Work-at-Height in the WorkSafe crosshairs

Forestry safety has been in the news a lot recently.

While arborists may be well aware of the differences between forestry and arboriculture, let's hope WorkSafe NZ sees it the same way. After all from the WorkSafe perspective both industries work with chainsaws and trees!

The real question for arb companies is this: if the spotlight goes on your business are you ready for scrutiny from this new Crown identity? 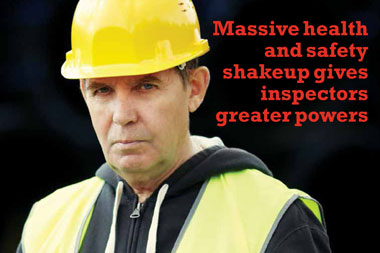