The WINTEC Best Practice Guideline for Tree Climbing was launched in Hamilton on Saturday 26 November 2011.

During the presentation Andy Harrison, the documents author, alluded to the fact that many of today's tree climbers had 'gaps' in their knowledge base.

Simply put: a little bit of knowledge can be a dangerous thing.

According to Andy these knowledge 'gaps' are exacerbated, rightly or wrongly, by the sheer amount of information available on the net via forums, YouTube etc combined with the proliferation of new tree climbing innovations constantly entering the market.

Would be tree climbing enthusiasts often forget the equipment on display at a tree climbing competition is being used by professional tree climbers who possess a high level of skill and understanding in regard to the product being utilized.

Treetools asked Rick Mexted, the NZ Arbor BPG liaison officer with the Department of Labour if the knowledge 'gap' Andy Harrison referred to at the BPG for Tree Climbing launch was something to be acknowledged in the wider industry.

Rick agreed with Andy, in his opinion there was indeed a 'gap' in the tree climber knowledge base and education.

Something as simple as tying the English prussic could potentially represent the 'gap' both men were referring to.

For example, Rick suggested some climbers knew how to tie a Valdotain Tresse (the friction hitch often used with the Hitch Climber but they had no understanding of the properties associated with the more versatile English prussic (also known as Prusik).

Something to be said for being old-school

Andy Harrison opened the discussion on the subject (at the BPG launch) by saying he might be considered 'old school' in his approach.

And those climbers with a 'gap' in their knowledge base will more-than-likely agree with him.

Regardless of these philosophical arguments, the WINTEC Best Practice Guideline for Tree Climbing is an excellent starting point for arb companies looking to formulate their own BPG to comply with the Dept of Labour CoP (Code of Practice).

Hard copies of the WINTEC BPG for Tree Climbing will be available from WINTEC and Treetools over the next few days - it is not available in PDF as far as we know - we'll keep you posted. 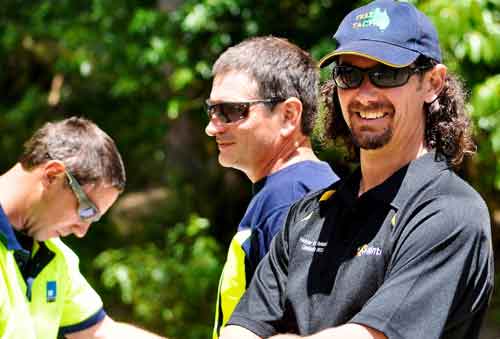