The basal anchor issues are largely limited to SRT Work Positioning and are not necessarily apparent in SRT Access systems.

As the climber moves about the canopy, releasing tension on the single line (while stepping up onto branches etc) the sheer weight in the running end causes the line to slowly creep back to the ground.

Rope weight itself is enough to create the problem but the situation is exacerbated when a mechanical device (for lowering) or rigging plate is added to the basal anchor system.

The combined weights of the climbing line and the lowering device can drag quite a bit of line over the suspension point, producing a large amount of slack in the running end.

This running end slack is not much fun when you finally do load the working end of your climbing line!

The issue is not such a problem in SRT Access because a static weight (the climber) is always applied to the line keeping it taunt at the base anchor.

As an aside, the continual 'creeping' of the rope also causes significant wear on the topside cambium where the single line passes over the branch.

A single suspension point might only be good to work half the tree.

A typical basal anchored single line suspension point is located over a branch, hopefully close to the stem.

As you work one half of the tree you will load your climbing line against the stem.

Once you move around the other side of the tree your line is no longer tight against the stem.

In some instances, possibly due to problem #1, the climbing line can move away from the stem, and creep out along the branch you are suspended from.

This problem magnifies the force on the suspension point in that leverage on the branch is increased as the line moves further out along the branch.

You now have double the load, combined with extra leverage at the suspension point producing who-knows-what in mechanical advantage at the branch/stem junction.

Again, this phenomenon is not as common in SRT Access due to the static load (the climber) producing downward force at the suspension point thereby keeping the line close to the stem.

Misconfiguration of basal anchor setups: this problem is common to both SRT Access and SRT Work Positioning.

In some cases subtle variations to the setup significantly changes the dynamics and safety of the configuration.

Have a look at the two photographs below.

One setup is almost entirely dependent on the stopper knot and the other cinches up safely against itself automatically.

You might have to look a couple of times because you probably won't see the problem at first glance.

Hint: the correct anchor behaves like a DbRT rope saver, only it's positioned at the base of the tree.

Care needs to be taken when setting your basal anchor.

Anecdotal evidence suggests climbers might be 'putting down their guard' when configuring basal anchors - this phenomenon might be due to the fact the climber is standing safely on the ground when they set the system!

The concerns above relate specifically to up-and-over base anchored SRT climbing lines.

A Canopy Anchor is suggested as the best choice in most instances.

Ascend the tree and install an additional access line once you are aloft (single or double) if you are so inclined. 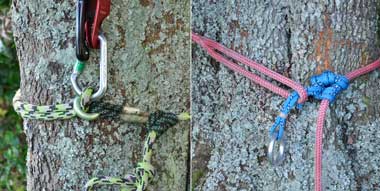