Why do smart arborists do dumb things?

Why do smart arborists do dumb things?

The Treetools store is akin to arb central in Auckland: climbers, groundies, contractors and company owners often gather at the end of the day and on the weekend to swap stories.

A common thread in these discussions are the 'near misses' of the day - accidents, that by sheer good luck, didn't quite happen. Kiwi's being kiwi's, these stories are accompanied by a great deal of laughter, back slapping and general taking-of-the-piss.

But there is also a more sobering side to these daily tales of true and bold.

Many of the incidents described are accidents just waiting to happen - simply put, smart people doing stupid things, often over and over again even when its obvious what the end result is likely to be.

Apparently this situation is not limited to aerial arborists.

Human behaviorists tell us this phenomena is called a 'routine violation' of the rules within the company… and it is very common.

Everyone knows what the rule is but for one reason or another its done another way. Everyone, including supervisors and managers, is usually aware of the dangerous shortcut but turn a blind eye.

The rose tinted glasses brigade will say someone should speak up. But the reality is everyone knows they will be punished, openly or otherwise, so they shut up and let it slide.

The Auckland University has a human behavior department which studies this phenomena. The department is headed by Dr Kathleen Callaghan, the Royal Commission 'go to' human factors expert for the PIke River mining disaster, so her credentials are impeccable.

Dr Callaghan notes three quick fixes companies adopt in trying to eradicate the problem of near misses (or actual hits). She also says they don't work in many instances.

Still on the subject of 'near misses' there is an interesting article In the latest edition of Utility Arborist about the prevalence of 'struck-by incidents' relative to the total number of tree work fatalities written by Douglas L Gober, Vice President, Asplundh Tree Expert Company.

Like Dr Callaghan, Mr Gober says the safety culture and patterns of behavior within the company are major contributing factors to work related accidents.

He also lists, among other things, ignoring 'near misses' on the work site as a a fatal mistake.

Unwittingly perhaps, in telling the stories of near misses at the end of the day, we are in fact learning something.

But a more formal approach to understanding arboriculture 'near misses' might make the better choice. 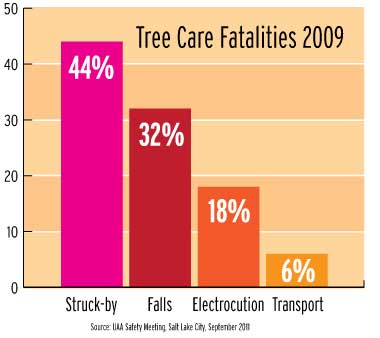