Second hand climbing gear; is it worth the risk?

Running almost in sync with the growth in the NZ 'lopper' market blogged about last week) there is a higher than normal level of interest in second hand tree climbing and rigging equipment.

One has to question, what aerial arborist worth their salt would contemplate purchasing gear with-no-history but that does not seem to stop the question being asked.

As a general rule, second hand equipment does not have a place in tree climbing but there are exceptions to the rule.

Spikes, climbers or gaffs (call them what you will) would be one such exception. A healthy market exists for second hand climbers.

Not that much can go wrong with them - most brands are so 'industrial' in construction a set will last you a lifetime… and then some. Gaffs are also attached to the tree well below the bridge, so most customers justify the risk with; what's the worse that can happen?

Another exception to the second hand rule might be climbing gear you have some history with - for example equipment you used at work that becomes available for sale (for whatever reason).

In this instance, a bargain was usually to be had because no one else was very much interested in buying the gear and the consequent lack of demand depressed the sale price. This phenomenon also restricted the sale of stolen equipment - unless it was stolen to order of course.

The requests at Treetools for second hand equipment appear to be largely coming from people who are unfamiliar with the safety requirements of aerial arborists.

We know we have them sussed when you see the 'ah ahhh' moment in their eyes - yes, I would like to know the history of the rope I'm climbing on? The number of times this pulley has been loaded to the max? And why this carabiner has a slight bend in the gate?

Caveat emptor! Let the buyer beware. But will that be enough? 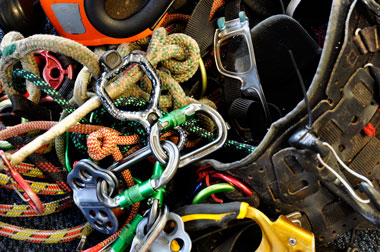