Graphite powder was commonly used by New Zealand tree climbers for re-lubricating the barrel on sticky carabiners. Until the visit to NZ by Treemagineers Chris Cowell and Mark Bridge back in August 2011 graphite powder was the only option available.

Chris and Mark introduced the use of Duck Oil in the 'Carabiner Workshop' held at Treetools during their August visit. They gave away free Duck Oil samples, in a natty dispenser, as part of the show.

Since that time, the demand for Karatol Duck Oil has escalated to the point it is now part of the Treetools carabiner maintenance line-up.

Duck Oil displaces water and keeps the barrel running smoothly. Application of a small drop will usually bring even the most stubborn carabiner barrel mechanism back to life.

In contrast, graphite powder does have a tendency to clog up and harden when a little bit of moisture is introduced to the equation. The more graphite you apply, the worse the problem becomes.

Karatol Duck Oil overcomes the clogging issue and keeps the carabiner barrel mechanism running smoothly - well worth having a small bottle in your kit for carabiner rejuvenation!

Thanks to Chris Cowell and Mark Bridge for this lead. 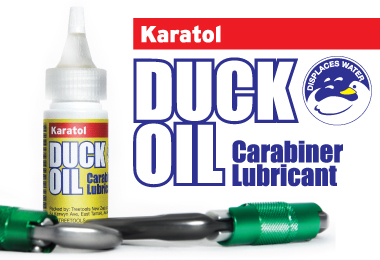