International tree climbing champion Scott 'the legend' Forrest has been on the receiving end of a few pranks in his time (largely driven by his old mate, and fellow larrakin Joe Harris but this one is NO JOKE.

Scott, with support from Treetools, has established The Scott Forrest Legends Foundation, a sponsorship mechanism to help raise funds for kiwi tree climbers who qualify for international TCC events.

Many competitors have to pay their own way to these events, or seek sponsorship from their employers, family etc. In some cases qualifying climbers have declined a placing due to financial constraints.

Initially, the Legends Foundation will derive its funds from a sales commission on Donaghys Cougar Blue tree climbing line. 10% of the cost price on all Cougar Blue sales goes directly to the Foundation. According to Scott there are other forms of fundraising planned for the future.

Scott, along with Australian tree climber Grant Cody, was instrumental in the development of Donaghys Cougar Blue.

2012 TCC Nationals qualifier Shaun Hardman will be one of the first of Treetools customers to climb on Cougar Blue - his 30m shank comes with a DB Tree tight-eye (the splice was kindly donated to the Legends Foundation by splicer Drew Bristow).

Neal is well familiar with the plight of tree climbers seeking funds for international TCC.

In the past he has supported Nicky in gaining sponsorship for her international travels and more recently Neal has been working to secure funding for this years Asia-Pacific TCC kiwi qualifiers.

Access to Legends Foundation funding is still in the planning stages. Treetools will make more information available as it comes to hand.

This is a fantastic initiative led by Scott Forrest and he should be congratulated for the effort!

The idea for the Legends Foundation, says Scott, was sparked by the NTCA co-founders and fellow tree climbers Joe Cooper and Troy Alderton who established the Agathis Fund for injured climbers back in 2010 (the NTCA Agathis Fund now has over $5000 in the bank!).

According to Scott this is his way of giving something back to the kiwi tree climbing community - he is the master of understatement to say the very least. 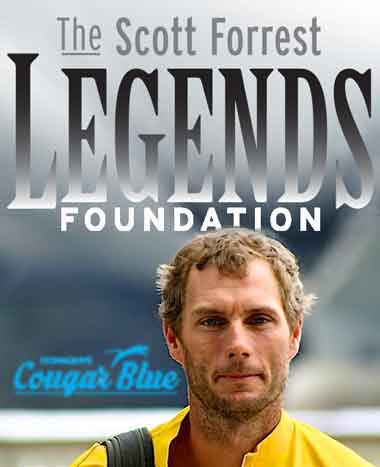