NZARB has had its eye on every step that WorkSafe New Zealand has taken since its launch in December 2013, and has been developing a strategy around how to support the arboricultural industry during the most significant reform of New Zealand’s workplace health and safety system in 20 years. This includes having representation on the forestry sector ACOP review, establishing key contacts within WorkSafe and forming an official industry advisory working group as a conduit to WorkSafe for the industry.

In February 2013, it was announced that a standalone Crown entity would be established to look after health and safety in New Zealand. This agency would have its own governance board, and would replace the health and safety part of the Ministry of Business, Innovation, and Employment (MBIE).

The creation of a stand-alone health and safety regulatory agency was a key recommendation of both the Royal Commission (following their investigation of the Pike River Coal Mine tragedy) and the Independent Taskforce on Workplace Health and Safety.

WorkSafe NZ was launched on 16 December 2013, and the health and safety functions of the Ministry of Business, Innovation and Employment were transferred to the new agency.

The New Zealand Arboricultural Association (NZARB) sees this initiative as a positive opportunity to influence health and safety regulations for the arboricultural industry. The industry is already going in the right direction thanks to a lot of hard work on the Approved Code of Practice (ACOP) and ongoing development of the Best Practice Guideline (BPG), which is the industry’s overarching document. Both of these resulted from collaboration with WorkSafe's predecessor, the Department of Labour (DoL). These documents remain the official reference for WorkSafe and its inspectors.

Although some within the industry may be concerned about WorkSafe NZ, NZARB's view is that if you follow current industry best practice, you are on the right path. You may also take comfort in a favourite quote from WorkSafe so far: "It is not our task alone. Every worker, every union, every health and safety advisor, every manager and every employer has a role to play".

NZARB promotes a single industry voice and welcomes the input of all with in the arboricultural industry. It has provided an avenue through this form of social media for questions and suggestions along with its website, where NZARB will provide one point of contact between the industry and WorkSafe, with regular updates or clear communication.

We are looking for involvement within the advisory group from industry professionals at all levels, for example equipment providers right through to industry trainers and pioneers.

NZARB's Key Objectives in relation to WorkSafe's establishment and future: 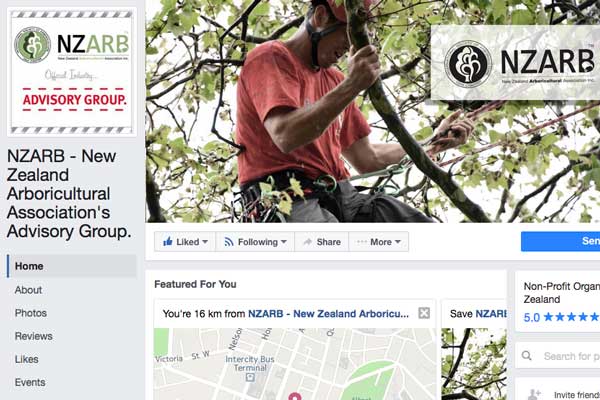