As it stands, the NZ Arb Association is the official representative of the commercial tree care industry in New Zealand. For various reasons, some members within the New Zealand arborist community, and companies active in the wider tree care industry, including firewood merchants, shelterbelt trimmers, saw millers, contract climbers etc feel they are not adequately represented by NZ Arb.

The debate came to a head mid-February 2014 when a question was raised by Central Otago arborist Jerry Lynch on the NZ Arb Association FaceBook page: 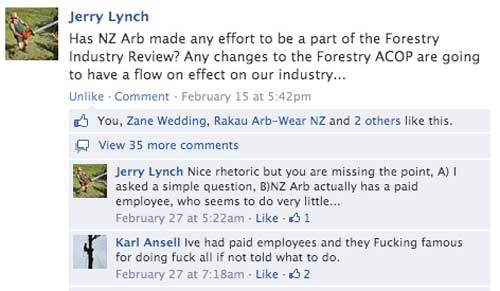 Along with a few sensible comments made in this thread, a tirade of abuse followed (from both sides of the argument - many of the comments have since been deleted due to their inflammatory nature) but Jerry's simple question remains unanswered by the NZ Arb Association.

Under normal circumstances opinions regarding forestry versus arboriculture felling practices or rope access versus tree climbing methodology would have been purely academic, and subject matter for much banter over a cold one, but with the advent of WorkSafe NZ, late in 2013, the game has changed (possibly forever).

Cognizant of this, and before posting this blog, Treetools approached WorkSafe NZ asking if any NZ arb industry representatives had entered into meaningful dialogue with the new department.

The answer was a guarded 'yes' but with negative results, certainly from the three WorkSafe NZ representatives Treetools individually spoke with.

Treetools could be doing NZ Arb an injustice here but WorkSafe’s answer does fall into line with comments made by a NZ Arb representative on their own FB page – that is, nobody “in the know” knew anything about the pending Forestry Industry Review by WorkSafe NZ and/or the ramifications/relevance this Review might have on arboriculture in New Zealand.

While this statement was later corrected by someone at the 'New Zealand Arboriculture Association’ there is still no answer to Jerry’s question on either the Associations’ website or their Facebook page… so, it’s little wonder members are left frustrated.

The mid-February debate saw the seeds planted for the establishment of new association to represent the wider tree care industry (not restricted to arboriculture) regarding safety matters and advocacy with WorkSafe NZ.

Treetools is sure many considered the concept (of a new association) to be ‘all piss and wind’ but fast-forward April 2014 and frustration has boiled over – on Friday April 4, the original protagonist, Jerry Lynch officially proposed the establishment of the New Zealand Tree Care Industry Association via a new FaceBook page.

Jerry’s April 4 proposal to establish the NZTCIA followed his own discussions with WorkSafe NZ regarding chipper safety (and pending amendments to chipper specification) combined with the fact that numerous WorkSafe NZ inspectors around the country had been applying 'forestry' and 'rope access' standards and qualifications to, what would normally be deemed, arb work sites (as predicted they would).

Where this one goes now is anyone guess, and it may simply turn out to be Jerry’s attempt to get the answer from NZ Arb to his original, very valid, question.

But one thing is absolutely certain, if the NZ arb community does not sit up and take notice, advocacy groups with a stronger voice than NZ Arb will indeed dictate safety outcomes for workers and business owners in the New Zealand tree care industry.