The Petzl Caritool (large and small is one of those 'can't do without' bits of tree climbing kit but it is not without its critics.

The biggest issue with the Caritool, particularly the small version, is its tendency to break (sometimes rather easily)!

The breaking point on the small Caritool can be found at the very base of the tool where the opening curves away from the spine but the real 'Achilles heel' is the wire gate itself.

While the Petzl Caritool gate is stronger than the Black Diamond Ice Clipper offering (see comparison blog post here it cannot withstand being snagged on epi's and small branches.

As you move about the canopy the gate can be inadvertently pried open when twigs get caught in the space between the wires.

Before you know it, the gate can be torn off  (the 'spring' tension in the wire is the only thing keeping the gate attached to the plastic housing of the Caritool).

The answer to this dilemma is quite simple: electrical tape or heavy-duty heat shrink.

Wrap the electrical tape (the heat shrink provides a more permanent result) around the wiregate from side to side. The tape will reduce the chance of small sticks entering between the wires, eliminating leverage on the gate, keeping it in place on the Caritool. Job done! 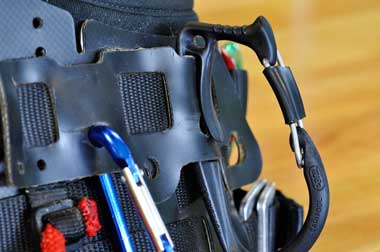