Treetools cannot quote international sales figures for triple-lock (Triact or Locksafe) carabiners but we do know our own market very well. For the uninitiated, triple-lock carabiners require three distinct movements of the barrel in order to open the gate and are considered mandatory in aerial arboriculture.

The Top 5 triple-lock aluminum carabiners sold through Treetools over the last 12 months are as follows:

The sheer number of variations in carabiner makes choosing the right crab a daunting task, even for the most seasoned gear freak.

So… what makes these five triple-locks so popular?

DMM Ultra O The Top 5 list above is an annual snapshot of our carabiner sales but the Ultra O has been top-of-the-pops for the last three years at Treetools, selling three-to-one over its nearest rival!

The Ultra O is commonly sold in pairs, along with the Hitch Climber, and this no doubt helps bump the sales volume.

Regardless this fact, the Ultra O is a very versatile carabiner specially when combined with hardware.

Treetools customers prefer the Ultra O in climbing configurations, lanyard attachment on the pulley end or in any application where hardware or mechanical devices are connected.

Petzl William Triact Long the favorite in arb companies where the selection of carabiner can be simplified, the Petzl William is the carabiner of choice on the bridge, especially in traditional climbing systems.

The wide loading area at the top of this crab allows for a terminated knot on the climbing line as well as the legs on a friction cord. Only one carabiner is required in this configuration.

The Petzl William also has a large gate opening and sports a major axis strength of 25 kN and minor axis 7 kN.

Combine the Petzl William with the Petzl Am'D and you can cover all your bases with just two carabiners - hence their popularity in arb company climbing kits.

The DMM Sentinel is very compact, with a wide gate opening (relative to its size).

The kinked back fits neatly in your hand making it easy to open and close with your thumb and forefinger. This 'ergonomic' feature results in the Sentinel being the carabiner of choice on the working end of a lanyard.

Petzl Am'D Triact the D-shaped brother to the Petzl William. Petzl designed this carabiner for use at the end of a lanyard but it has plenty of other applications in a climbing system hence its number 4 ranking.

The asymmetrical shape makes the Am'D useful for attaching mechanical devices by reducing the opportunity to side-load.

Like the Petzl William the Am'D is versatile enough to work in any climbing kit. This simplifies the buying process for many arb companies.

DMM Revolver This one is a bit of a surprise (and that is no reflection on the Revolver).

The DMM Revolver is at the upper end of the price range for carabiners. One would expect the higher price to stifle sales volume but the Top 5 ranking is testament to the value placed on this carabiner by the tree climbing community.

Designed by the Treemagineers, the DMM Revolver is one of the only 'binerson the market to be certified both as a carabiner and a pulley. It usesrolling friction rather than sliding friction when the climbing line passes over the bar.

The climbing line rolls on a small pulley sheave located in the base of the Revolver, producing lessfriction in the system. 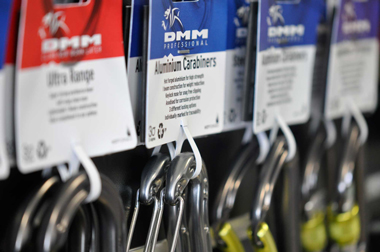