Following the dramatic DB Tree 'Frog System' drop-test experiment early in 2012 kiwi tree climbers started taking an active interest in ropes where the sheath and core are permanently bound together - resulting in zero sheath slippage and no 'socking' when excessively loaded.

The first ascent line off the rank at the time was Beal Unicore - as suggested by Dom Eastwood in this post.

There is plenty of marketing verbiage on the Beal website but, for all that, Beal do not give any technical detail regarding the construction of this rope. As far as Treetools can ascertain Uni Core's sheath and core are 'adhesive bonded' (read glued) together via an intermediary carrier.

The Teufelberger website says: For the first time in the history of rope making the previously independent elements of a rope are merged into one unit.

"With thistechnology we have created the basis for higher safety, a longer service life and better handling", the managing director of the Teufelberger Group Florian Teufelberger explained.

And all this is true - you can read Treetools take on the new line here. So good is this rope Teufelberger have already submitted for patent.

But another European company has been sitting in the wings all along with a rope technology similar in construction to that of Platinum.

According to Mamutec marketing EN 1891 Paraloc in different to traditional kernmantel ropes because the strands are 'partly' shared between core and sheath. 90% of the core strands stay in the core with 10% interwoven into the sheath.

The same 10% share occurs between sheath and the core, essentially locking each element together producing zero sheath slippage.

Beal is slightly out of the loop in this discussion because Uni Core is bonded together with adhesive but both Teufelberger and Mamutec appear to be going down the same route with their kernmantel rope development to produce a climbing line with zero sheath slippage.

At this point, in terms of tree climbing at least, Teufelberger have the upper hand since they are already well established the aerial arb market. Treetools will be sticking with Platinum thanks Mammut. 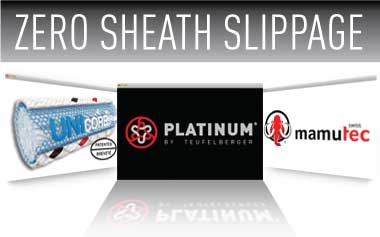