One downside of media hype is the risk of 'over promise and under delivery' for the customer.

All the research and development in the world, pages of technical jargon and a product specific website count for naught if the product itself does not deliver on what the marketing and promotion promised.

One could argue Teufelberger took a calculated risk with some the bold claims they made at the launch of the latest in rope innovation, Platinum, a climbing line designed specifically for SRT Ascent.

The marketing must have worked because Treetools started selling Platinum as soon as it arrived in store (it is not listed on the Treetools website yet).

We have not even had a chance to trial and evaluate the rope.

Consequently, anecdotal feedback from Platinum owners is now streaming back in to Treetools.

While this kind of feedback is valued it is not an ideal situation. We end up selling a product without knowing exactly how it will perform - apart from reading the corporate literature - see previous blog post here.

Platinum PES/PA has a notional diameter of 10.5mm, is rated to EN 1891A with an elongation of less than 4%. Milking or sheath slippage is arguably zero (0-0.3%) - the sheath and core are interwoven to produce this number.

On paper at least, Treetools expected the line to retain a degree of 'bounce' - similar to other EN 1891A climbing lines - although, to be fair, we were hoping it would be relatively small.

Platinum did appear to have a very tight weave so we imagined it would be ideally suited to toothed cam ascenders.

And that's where the surprises come in.

Climbers are telling us: with a base-anchored single ascent line set over a 25+m branch, the 'bounce' test and the first step produced a disappointing result - there appeared to be too much elongation or bounce in the line.

This usually results in an out-of-sync ascent where the 'bounce' corresponds awkwardly with the climbers hand and foot movements producing a stop-start motion.

But not with Platinum… as soon as the climber moves off the ground the rhythm changed. Rather than harsh and bouncy the ascent became fluid and smooth, with the small amount of elongation in the line working in unison with the climber.

Apparently this is quite an odd sensation, experienced by a number of new Platinum owners.

Why the smooth, fluid ascent with little bounce?

Over the years Treetools has spent countless hours pouring over rope specifications in an effort to marry up specs with the tree climbing experiences related to us in the shop - as a non-tree-climber this helps me provide relevant product advice.

The ascent experience with Platinum piqued my interest.

By our reckoning the smooth, fluid ascent following the first disappointing 'bounce' described is related to the zero slippage between the sheath and core on Platinum.

The sheath on many traditional kernmantle and double braid ropes slips on the core when the hand ascender, Petzl Croll and Petzl Pantin are loaded on the ascent line with the body weight of the climber.

Dependent on rope quality, the resulting sheath slippage can amplify the elongation in the rope (and the bounce in the anchoring branch) to produce the out-of-sync ascent rhythm.

Platinum does not have any noticeable movement in the sheath so you are left with the minimal bounce in the line (and that in the anchor) which appears to work in the climbers favor.

We could find no reference to this phenomena in any of the Teufelberger documentation but sheath slippage with toothed cam ascenders is a known quantity so the result is not entirely surprising.

We'll post more information as it comes to hand but at this point Teufelberger Platinum is living up to its media hype. 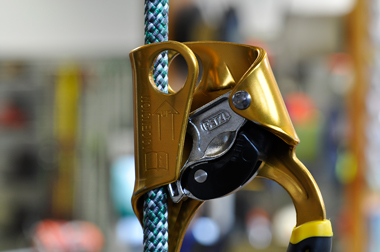