A couple of years ago Jerry Lynch organized a splicing workshop in Dunedin, presented by Menno Kluiters and Jelte Buddingh, as part of a Labour Weekend climbing festival. Along with a training session, the plan was to establish some sort of 'certification' criteria relative to splicing production.

Unfortunately, only half a dozen would-be splicers turned up to the workshop leaving Jerry feeling a little grumpy.

The funny thing is, the splicing workshop/certification concept in itself was not a dumb idea - Jerry just happened to be a little ahead of his time.

Since then DB Tree has become New Zealand's preeminent tree climbing splicer producing dozens of climbing and rigging lines, rope tools and various custom made rope products. DB Tree splices have been extensively tested by Treetools for consistency and strength.

More recently individual tree climbers have shown a renewed interest in the art of splicing. And this is a good thing.

As a byproduct of learning to splice climbers gain a much deeper understanding of the ropes they are working with. They also learn to appreciate what it takes to produce a safe splice, consistently.

Most climbers splice for themselves, which is akin to them tying their own knot, so there is no need for certification as such. However, Treetools still recommends the testing of splices to confirm the result of the procedure is correct.

The issue of 'certification' only becomes apparent when the splices are produced commercially (or for your boss).

Two years on and taking the lead from Jerry there is talk of another series of splicing workshops to be held around the country. Treetools also believes a prominent US-based splicer might be making an appearance to pass on his valuable knowledge. 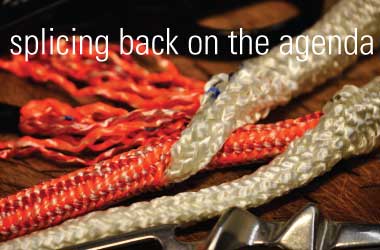