LATE BREAKING NEWS! Last week Treetools blogged about the progress a certain NZ Arbor sub-committee was making in recognizing the subtleties of single rope technique (remember the irritating debate at the Auckland Regional TCC regarding the use of SRT Work Positioning in the competition).

The NZ Arbor sub-committee were onto cutting edge stuff with this submission, since most ISA chapters are still bundling the term SRT under one umbrella.

Apparently the Treetools blog post put the cat amongst the pigeons!

All of a sudden the world was looking at New Zealand for direction on the use of SRT Ascent and Work Positioning (a spike in visitor numbers to the Treetools blog confirms this assertion).

And yet, if you read the submission, it's content is commonsense and not controversial at all.

Now, with heat from the ITCC spot light on the humble kiwi SRT submission, a rethink is afoot.

According to sub-committee member Jerry Lynch, the NZ tree climbing community has about 3 weeks to collate and review SRT submissions for inclusion in the 2012 Best Practice Guideline.

A unique email address has even been set up to receive climber input - climbsrt@gmail.com - please forgive the bias in the name.

A single rope technique symposium in Auckland is also on the cards.

The proposed symposium would offer a chance for everyone involved in New Zealand tree climbing to have their say regarding the use of SRT Ascent and Work Positioning in tree care (for and against).

This includes the use of the Rope Wrench and the Unicender (SRT Work Positioning) as well as the traditional 'frog' systems (SRT Ascent).

Treetools will post more information as it comes to hand. 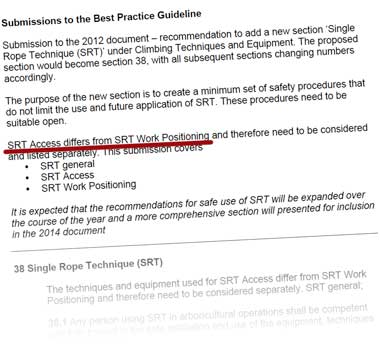