The long-awaited Petzl Vizir, the clear, helmet-attached eye protection for Alveo and Vertex helmets has been a bit if a fizzer for some customers.

The biggest complaint Treetools has fielded so far is the distorted vision most people experience when they first start wearing the Vizir.

Luckily, the problem is easily solved.

The Petzl Vizir version is very hard to see, so you will need to take a close look! Ideally it would have a small tab for you to lift but that has been overlooked.

This thin plastic layer protects the outer lens until it is ready to be put to work. Use you fingernail to lift the edge of the film, and peel away.

The Vizir has one other niggle and this one is not so easily remedied.

It appears the Petzl Vizir designers have been a little too optimistic with their tolerances between the Vizir and the front lip on the helmet.

After a period of time the two faces touch, ever so slightly, and eventually the lens of the Vizir will scratch on a small portion of the inside, top front of the lens where it comes into contact with the helmet rim.

This does not impede your entire vision, but it is annoying when you have just shelled out good money for the lens! Maybe Petzl will fix the problem with Vizir Version II - let's hope is doesn't take as long to develop as the first one did.

Lift the protective layer with your fingernail and peel away. 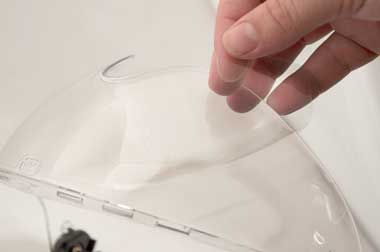