Cynics will say "tree climbing equipment manufacturers deliberately publish conflicting figures to confuse the market" but it is doubtful that is the case.

ISC continues to state the MBS (Minimum Break Strength) on their pulley. In principle, by providing the MBS, the climber decides on the safety factor to apply, relative to their specific configuration, and uses the pulley accordingly.

The use of the WLL reference has probably got very little to do with the market influence of tree climbers (although we might think otherwise).

The change is more likely driven by the requirements of IRATA (Industrial Rope Access Trade Association).

When climbers compare these two micro pulleys side-by-side they need to be aware what the different terms mean.

And, apart for the difference in stated ratings, there is another major distinguishing characteristic.

The ISC Fixed Micro does allow for some loading on the becket (WLL 2.5kN) while the Petzl Fixe has no rating whatsoever.

This presents a problem because the Petzl Fixe is commonly used in tree climbing systems with one leg of the friction hitch attached directly to the unrated becket - an example of market confusion perhaps? 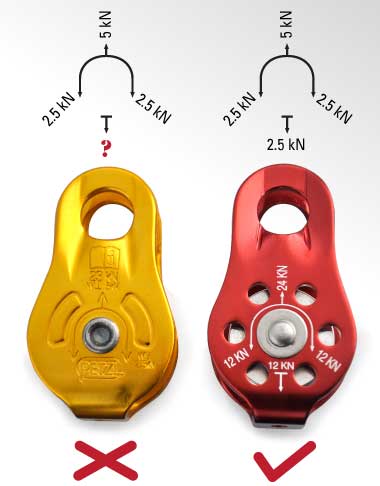