The new website celebrates the success of New Zealand tree climbers on the international stage.

The Legends Foundation trustees are keen for the site to act as a repository for New Zealand tree climbing related material, including historical data, photographs and characters - particularly those people who have had an influence on the countries success at an international level.

To that end, tree climbing 'Legend', Nicky Ward-Allen has suggested future Legends Foundation blog posts feature individuals who have helped in making things happen for our kiwi tree climbing athletes. Treetools can already think of a few who will feature on that list!

'Legends' has already paid out to Asia-Pacific TCC competitors and contributed to those attending the 2012 ITCC in Portland. Scott also managed to wrangle a 50m length of 10mm Armor-Prus for Ross Kite and a replacement 50m Teufelberger Globe 5000 for Nicky Ward-Allen.

The Scott Forrest Legends Foundation is another of the recent tree climber initiatives to have taken flight over the last few years, joining the ranks of the Northland Tree Climbers Association led by Joe Cooper and Troy Alderton, The NTCA Agathis Fund, Matt Glen's Open Masters, the Jerry Lynch and Hackfalls Arbor Camps and the Taranaki Open TCC.

It has been said in the past that tree climbers sit on their hands and do nothing - surely that argument can be put to rest - well and truly! 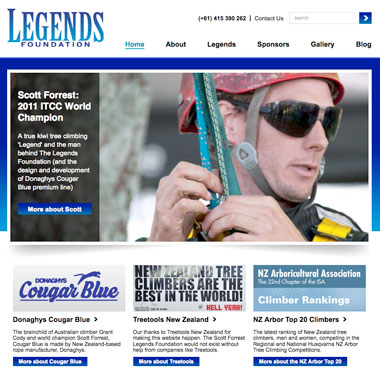