A tracked German-made A530 6-inch chipper has been doing the rounds in Auckland over the last few weeks as part of a promotional effort by the NZ Jensen distributor, Tauranga-based Alfa Contracts.

The Jensen A530 (6 inch) and the bigger capacity A540 (9 inch) are designed for accessibility and angled terrain. For example, the Jensen A530 is only 700mm wide, capable of getting through most gateways - the tracks are extended for stability once the chipping operation begins.

Tracked chippers have been available in New Zealand for some time but they have not sold in large numbers. According to Asher the benefits of a tracked chipper has not been fully acknowledged.

He says, in reality, you can have the best of both worlds: a tow-able chipper and a mobile tracked chipper all-in-one. The Jensen A530/A540 can remain on the trailer, operating like a traditional chipper or it can be moved onto site when needed.

And there are plenty of work sites around the country with limited chipper access so Asher could be onto something here. 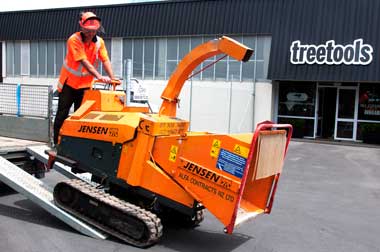 Asher Bowyer demonstrating his A530 at Treetools in East Tamaki.