Mexican-born Sal was well known in tree climbing circles and loved nothing more than coming to New Zealand to immerse himself in our own brand of tree climbing culture.

Details are sketchy surrounding his death but we understand Sal and his crew were working in Palm Springs over the weekend. Sal and a groundsman Brett were sleeping in his toybox (camper/trailer) while the rest of the crew camped out nearby.

When Sal and Brett did not turn up for breakfast, on investigation, the crew found both men in the trailer asphyxiated by carbon monoxide (we are assuming they were running a generator or something?). Read the local news article here.

I first met Sal Hernandez at the 2011 ITCC in Parramatta.

Sal spoke to me about his interest in the forces driving the grassroots tree climbing movement in New Zealand, so prevalent here at that time. His dream was to emulate this passion in his own tree climbing community.

"The best thing is to come see for yourself" I said.

Ninemonths later Sal and his co-worker Manny Diaz turned up at the NTCAOtaua Tree Climbers Gathering in the Hokianga - on a mission - to experience, first hand, a 'real' kiwi arborcamp.

They caught the bus up from Auckland. Arriving in Kaikohe, Sal phonedone of the arborcamp organisers Joe Cooper and asked for a lift out to the site - because, not surprisingly, they had no idea where they were!

"I'm off to pick up a couple of bandido's" announced Joe, leaving everyone scratching their heads.

Have a laugh and read this previous blog post featuring Sal and his head-to-head speed ascent against Matty Smith.

Come Sunday afternoon, I offered Sal and Manny a lift back to Auckland. We were joined in the Treetools truck by Lin Wah Ling, another international tree climber attending the Otaua Gathering.

Driving back down the coast I got to know Sal a little better.

Being a typical 'American' he wanted to 'tip' for everything.

I politely advised him that flashing large dollops of cash was not the done thing in NZ and one might even be offended if money was offered when a favor was given.

Consequently, Sal found it hard to get his head around the 'free' Sunday afternoon tiki-tour down Northland's East Coast.

During the trip back to Auckland Sal talked non-stop about the off-chance of meeting the then reigning world champ, Scott Forrest.

As far as Sal was concerned the chance of meeting up with Scott Forrest was nigh on impossible.

As luck would have it Scott was working with Hamish Fraser in Cambridge around the time of Sal's visit. Both Hamish and Scott were only too keen to have the Mexican bandidos (as they were affectionately known by then) working with them for the day.

Idrove Sal and Manny down to Cambridge early one morning and Hamish dropped themback to Auckland very late in the day (a little worse for wear I am ledto believe).

But Sal had met and climbed with the world champ, Scott Forrest - all his dreams had come true!

The Smith brothers and the Unicender

The morning after the Otaua head-to-head I crawled out of my tent just before dawn to get a brew going.

Sitting there with my first mug of coffee, watching the sun come up, I realized there was a climber already in the large gum used for the head-to-head the previous evening.

Curious, I wandered over to see which silly bugger was up at this time of the morning (following the night before).

There I found Sal, carefully rehearsing his ascent procedure to see what had gone wrong the day before. "I should have beaten Matty" Sal repeated to himself "it must be that Unicender thing he uses!"

As soon as we got back to Auckland he wanted to get the Unicender set up to see how it worked.

Uni maestro Johno Smith (Matty's brother) kindly came into Treetools and took Sal down the road to some big pines so he could give the Uni a go. A brand new Unicender was soon packed into Sal's kit bag.

Both Johno and I reminded Sal the Unicender was an American invention but he wouldn't have a bar of it; as far as Sal was concerned the Uni was kiwi through and through.

The fact I would not let Sal tip for services rendered must have really bugged him. Before he departed Auckland for home he said "I will return the favor someday". It turned out to be sooner than you think.

Some months later my son Pete and a friend of his dropped in on Sal and his family in San Diego while on their USA road trip. Sal had met Pete in Auckland.

Instead of stopping for a couple of beers Pete and Steven stayed for a week… and Sal would not let them pay for one thing! Not one single thing! Including a side trip to his homeland - Mexico.

I had a lot of time for Sal.

He worked tirelessly for his beloved tree climbing community, his business and his family. The tee shirts are already printed for his own version of "The Scott Forrest Legends Foundation".

Sal, you shall be missed both here and at home - go in peace my friend. 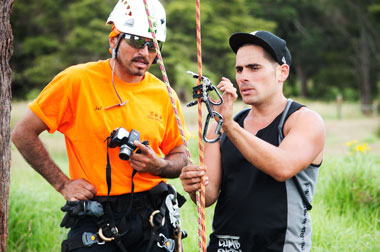 Sal Hernandez with Johno Smith checking out the Unicender at the NTCA Otaua Tree Climbers Gathering, 2012

Javier Quiroz: Just wanted to thank you for that great article on my bro Super Sal, he will be greatly missed by his Friends all around the tree world…

All the Best Javier in SO-CAL