Tall (arb) tales of true-and-bold are par for the course at Treetools! Most of the stories are hilarious accounts of on-the-job hi-jinks resulting in right royal stuff ups - work place banter you would expect to hear in an industry like arb.

But, there are times when the stories take on a more sinister tone, especially when we hear red flag words like 'the gear just fell apart' (not unlike the new Spiderjack 2.1 Dyneema story in yesterdays blog post).

Touch wood, modern tree climbing and rigging equipment simply does not 'fall apart'. It does however get mis-configured, cross-loaded, overloaded, stabbed and generally abused.

Treetools has tested plenty of rigging and climbing equipment. We know firsthand what this gear can take and it is a rare day indeed when we test a piece of kit that falls below the stated manufactured ratings.

We also know when the proverbial 'wool' is being pulled over our eyes.

Most of the gear we see that has 'fallen apart' did so because it was incorrectly used or badly maintained. Or it was abused repeatedly and fatigue has finally taken its toll (that's cycles to failure for you).

The fact of the matter is this: all rigging and climbing gear will break - eventually. Incorrect use will definitely accelerate the process.

The Cordage Institute also has this to say regarding rope failure:

“Overloading or shock loading a rope above a reasonable working load limit can cause significant loss of strength and/or durability. However, the damage may not be detectable by visual or tactile inspection. The usage history of a rope is the best method to determine if excessive tension or shock loading has occurred.”

Usage history! Whaaaaat? We don't do that kind of thing around here!

Whatever. When we hear that gear has 'fallen apart' prematurely, one thing is certain, these words ring very loudly in our ear. 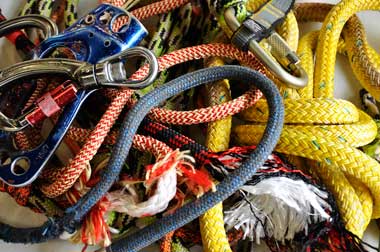