Shouting, yelling, hand waving, whistling and the tossing of the occasional chog of wood at the groundie are no longer acceptable forms of communication (apparently).

Bluetooth is the favored technology because it is considered completely wireless albeit with limitations.

Anyone with a phone hands free device in their vehicle will tell you Bluetooth is only good for about 10 meters.

As an example, the Sensear SM1xSR offers Bluetooth connectivity but its only good for short distances. Sensear gets around this limitation with a FM radio connection between the headsets. FM pumps connectivity to about 50m which, in some cases, is not still far enough.

Anything over 50m and you have to resort back to a traditional radio connection which means wires from the headset to the radio (think Stein PTT). If possible, climbers, in the tree, would prefer to be completely wireless.

A Norwegian-based company A-Kabel have developed a proprietary Bluetooth headset with a range of 250m. We first ran across the ArborCOM headsets in the most unlikely of places.

A 'super yatch' berthed down at the viaduct in Auckland had a couple of ArborCOM headsets on board.

The shore-based maintenance guys, working on the 50m masts, got to using the Norwegian devices and couldn't believe the quality of signal (they too assumed Bluetooth was not capable of transmission over about 10m).

The headsets in question were labeled ArborCOM so they got on the blower to Treetools.

Long story short, we'll have the A-Kabel ArborCOM headsets in stock early next month. Prices are yet to be confirmed but they should sit somewhere between the Stein PTT and the Sensear SM1xSR. 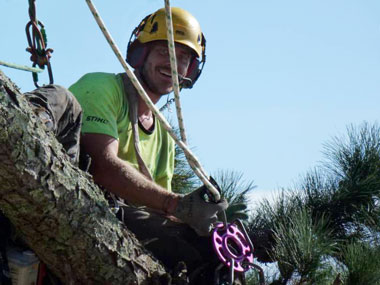