Tri-lock, triple-lock, self-lock or 3-way carabiners are not fail safe - the gate can accidentally open while climbing!

Marketing, and the prominence of ratings and certification on hardware, paints a picture of ultimate safety for the climber but using current tree climbing methods the three-way carabiner cannot be relied upon, absolutely, to retain the climbing line and friction system during a climb.

The first experience of an inadvertent gate opening while aloft can be more than a little disconcerting for the climber involved but this potential flaw in the design of the self-lock carabiner is simply a fact of life in aerial arboriculture.

Detachment of the climbing line and/or friction cord might result if the climber is not vigilant at all times.

The carabiner gate can accidentally open due to contact with the climber, peripheral equipment or the tree itself, usually while moving over a branch. Anecdotal evidence suggests that in some climbing configurations the orientation of the carabiner may increase the chance of accidental opening.

The gate can also fail to close or 'self-lock' once it has inadvertently opened. In most cases this is due to contamination in the barrel mechanism rather than failure of the carabiner from new.

Unfortunately, maintenance to free a sticking gate mechanism is often short lived and, depending on the amount of contamination present in the barrel, cleaning can sometimes be impractical. In these cases replacing the carabiner is the only option.

Back in 2003 the HSE in the UK conducted a study on the accidental opening or three-way carabiners used in tree work following a series of incidents in the field - you can download the HSE report .

The authors of the report concluded that while tri-lock carabiners might not be fail safe they are still the best choice of carabiner for tree work. 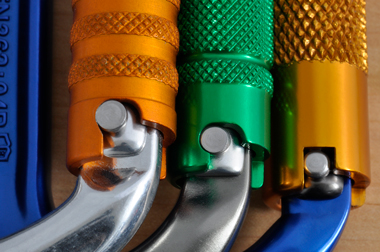