You would be surprised at the number of tree climbers who claim carabiner 'side-loading' is not common in tree work.

Treetools has a broken 'side-loaded' DMM Sentinel carabiner on display in the shop. The biner in question is the result of a break test conducted by Treetools back in June.

Many customers look at the destroyed Sentinel and say 'that never happens in the real world'. But… we beg to differ!

From our experience, carabiner side-loading is relatively common in tree work, even more so if the climber is not paying attention. For example, based on anecdotal evidence, it appears more common with workers new to tree climbing.

At the other end of the scale, you can see the world's No 2 climber, Joe Harris, with an obvious, side-loaded carabiner. The image is lifted from the iClimb video of Joe's Masters climb at the 2011 ITCC in Parramatta.

In this instance, plenty of people were paying very close attention: Joe himself, the technicians in the tree and at least five world class judges on the ground. Not to mention an audience of at least 500 people. To our knowledge, no one on the day (apart from Joe perhaps) was aware of the side-loaded carabiner.

Most climbers do not have the luxury of having world class observers pointing out every safety risk on the job, so you can imagine how many times this must actually happen in the workplace.

The more pragmatic amongst us will say the risk of side-loading a carabiner is part of the job - and that is true. Being aware of the problem and vigilant against occurrence also makes perfect sense.

What seems less logical, however, is the complacent attitude many tree climbers have developed towards the issue? 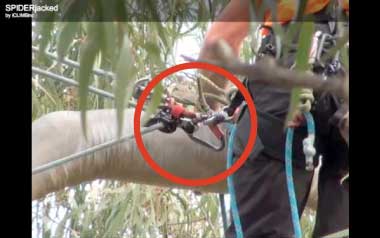 Disclaimer: The use of the above image is for education purposes only and is in no way a reflection on Joe Harris's ability as a safety conscious climber.