Treetools landed a 'tester' Buckingham ErgoLite harness early last month. Before we could properly evaluate the harness a climber came into the store, slipped it on and tried a couple of moves on the Treetools 'tree'. He purchased it on the spot.

As the name suggests the ErgoLite is the lightweight version of the Buckingham Ergovation. This latest harness was designed with input from C.O.R. Ergonomic Solutions, the US-based husband and wife team of Ed and Amanda Carpenter.

Among other things CORE works to educate aerial arborists about injury protection and the reduction of musculoskeletal disorders often associated with working at height. Their involvement lends real credibility to the design of this harness.

Apart from being lightweight the ErgoLite has a number of differences to its bigger brother, the Ergovation.

Unfortunately, the Warp Speed is a fixed length bridge so you loose the adjustment options available with a knotted version.

The large eyes on the bridge are cinched onto a couple of stainless clevis shackles - the three hole rigging plate bridge attachment point found on the Ergovation has been dropped on the the ErgoLite.

Another feature of the bridge attachment is a second set of 'dees' mounted beneath the work positioning side D-rings. According to the Buckingham advertising blurb this 'allows the bridge to articulate' providing more freedom of movement for the climber.

The ErgoLite has retained the Velcro belt for easy dressing. Simple as it might sound, the Velcro waistband proved to be a major selling point on the Ergovation.

This new Buckingham harness is sized, Small, Medium and Large, so make sure you get your measurements right before you invest - there's not much of a market for second hand harnesses.

The Buckingham ErgoLite is not listed on the Treetools website at this point due to there not being enough hours in the day. 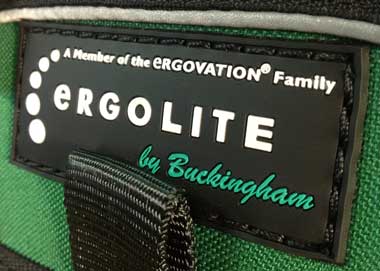