Treetools touched on the subject of ART innovation late last year but many readers managed to overlook the detail, preferring instead to get lost in Joe Harris's Spiderjack instructional video (and we can understand why).

Part way through the video Joe makes a reference to the planned changes for the Spiderjack due for launch in the first quarter of 2012.

Climbers who own a Spiderjack will have experienced the frustration with the Velco connector which is designed to hold the terminated end of your line parallel with the Spiderjack.

Invariably the Velcro pops off the attachment point leaving both the termination and Spiderjack floating on the bar of your carabiner. Not life threatening but bloody annoying!

Some climbers have attached a short Dyneema sling and another carabiner to the system - one for the Spiderjack and one for the rope termination.

The webbing sling is slightly more 'flexible' than a spliced eye and this reduces the chance of the Velcro releasing during the climb.

ART have acknowledged the problem and addressed it by adding the milled aluminum webbing sling attachment (the red thing in the image below) in favor of the Velcro connector.

Another new feature for the 2012 Spiderjack is the rope guide for managing the tail end of the rope. It is not visible in the image below but you can clearly see it on the 3D PDFs. 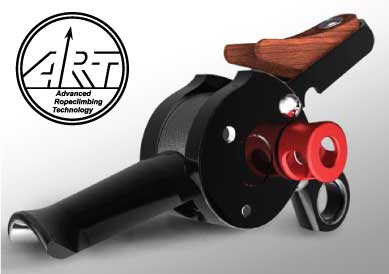