James Kilpatrick and our other 'international' tree climbing stars are probably blissfully unaware of the fact their climbing set-ups are picked over with a fine-tooth comb following every Masters climb… and this year was no exception.

As the world secured footlock record holder, many spectators (and Treetools photograph viewers) assumed James would footlock into the tree, so his SRT system attracted even more attention than you would expect.

Before we start, climbers need to cognizant of the fact the TCC Masters SRT systems are operated by 'masters' of the sport who understand the complexities and nuances of such systems.

James used the Petzl Rig as the lowering device in case of an accident (attached to the base-anchor). The Rig has a very narrow operating window of 10.5 - 11.5 mm for EN 1891A rope making it unsuitable for some of the thinner diameter access lines.

The Rig is also rated to EN 12841-C as a Rope Adjustment device to be used in conjunction with Kernmantle (access) rope.

The EN 12841-C standard is a little unusual in that it allows the user the decide upon which rope is appropriate - this situation has come about because it is not possible to test every Kernmantle rope available on the market.

You can see this principle in action: 10mm Globe is half a mil outside the specifications of the Petzl Rig so the line 'creeps' through the device when two climbers are attached (as you would get in the event of a rescue) whereas 10mm Liros Racer, used by James, works just fine with two on-board.

Treetools is uncertain as to why one 10mm line works over another on the Rig - it could be down to something as simple as the technology used in the construction of the rope but James knew for certain 10mm Liros Racer would work due to his previous testing.

These are real subtleties and one questions whether event judges have (or should be expected to have) such intricate product knowledge?

Another unusual feature of James' SRT set-up was the Ushbar Basic pushed ahead of the hand ascender via a carabiner attachment (which also served to 'lock in' the rope).

Most other SRT configurations operate with a chest ascender (being the second point of attachment) tethered some distance below the hand ascender.

As far as Treetools is aware there are no official 'standards' for SRT ascent systems so, rightly or wrongly, the above configuration is now considered defacto, thereby making James set-up outside the norm.

Being under the microscope is possibly a burden for our tree climbing stars but you can put money on one thing: James would be the first to say 'be very careful about using SRT systems seen in the Masters'.

At least until you have the appropriate training and/or experience. 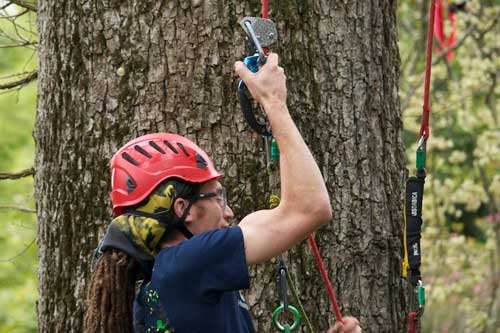 The Titanium Ushbar Basic is no longer manufactured - the closest equivalent product is the DMM Buddy or ISC Rocker.